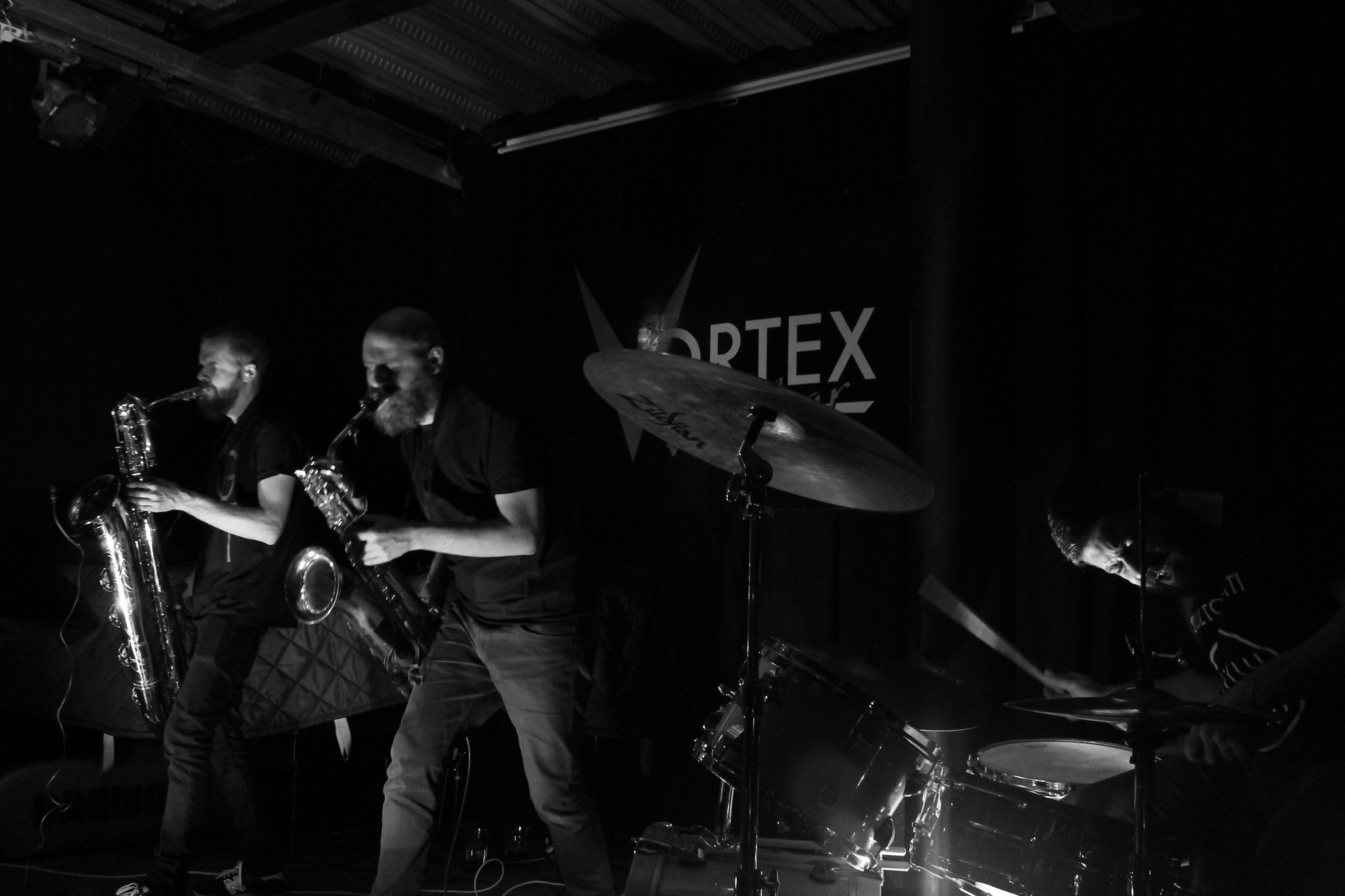 Dead Neanderthals are a scorching free-jazz noise fire-duo, made up of drummer Rene Aquarius and saxophonist Otto Kokke. In 2014, they released the astonishing ‘Prime’, a blistering cataclysm of a record, a ceaselessly furious eruption, which saw another saxophonist, Colin Webster, joining them to add that extra density needed to progress from recklessly confrontational to transcendental ascension. ‘Prime’ is a breathless no-pause forty-minute blurt that has the power to rearrange your body when heard live. I grew a compound spider-eye on my left shoulder as a result of seeing them at the Vortex.

Already a prolific group, this year has seen a flurry of releases from the band. Firstly, ‘Craters’, on the Consouling Sounds label, is the fallout from their fierce sax-explosions on ‘Prime’. The horns now come and go with fluttering whines and low oscillating drones. The addition of bass (Maxime Petit) and synth make this a long-form exercise in competing buzz, ably deploying the sea-sick chainsawing of KTL circa ‘V’. The bass plunging in occasionally with a throaty wobble, like a snarling animal. Synth whine occupies the upper registers, occasionally descending like a strafing aircraft. ‘Craters’ sees the band opening up some space in their music, but keeping the light out. This is a long grey northern European winter of an album. If ‘Prime’ was a bang, a combustive shock, this release is the cooling parts, an examination of the hissing shrapnel. The deafening volume is still there, an instrument in itself, but it’s used to prolong an elongated moment rather than to add impact to violent activity.

With an opening like Cthulu tuning some bagpipes, ‘Molar Wrench’ (on Hominid Sounds), is a collaboration between Dead Neanderthals and Sly & The Family Drone that announces its intentions from the off, namely to lay ecstatic waste to its audience. A returning Colin Webster contributes writhing alto, Otto Kokke hurricanes out foghorn siren blare, Rene is joined by Callum Joshua Buckland for some double-drummer anxiousness, and Matt Cargill adds electronic earthquake rumble. ‘Molar Wrench’ sounds like a medieval forge where the workers are doing frantic overtime to meet some kind of pressing pre-battle order of swords. The album is incessant in approach – moments of (relative) calm are few, ‘Muck Man Part 2’ has the band sounding each other out in a fog, an attempt at echo location by music; an ecosystem of sound, glimpses of fur and scurrying, multi-jointed legs. Matt Cargill’s blasting molten sci-fi bloop is a very welcome guest, prizing some space out of Dead Neanderthal’s grit storm and adding vibrant texture. I’m a sucker for a two-drummer band, but the extra pair of hands on this album makes for an adrenalised fidgetiness that is extremely absorbing, particularly as ‘Muck Man Part 1’ tires itself out in a mystifyingly funky panting sated slump.

‘Molar Wrench’ is a lethally fruitful copulation. A total music; the bands’ respective ingredients baked into a delicious fire-cake. The sort of noise that leaves you with a greater clarity of mind afterwards, cobwebs expresswayed out of yr skull. Joyous cacophony.

And now, we descend to ‘The Depths’, Dead Neanderthal’s latest excavation; an album recorded with Rene and Otto at opposite ends of a 100 metre long tunnel. A short documentary by Dick van Aalst and Inge Hondebrink details its recording process.

This no-rehearsal performance is, by necessity, more exploratory than their other releases. The saxophone telegraphing burring single bursts that provoke splashing cymbals and bubbling rolls of drums. The band seeking each other out over the distance; the mind-meld of the skronk duo stretched to nullity, they instead roll hesitant gestures to each other. The ‘Depths’ is an experiment resulting in a fascinating dialogue, subtle in execution if not in conception. The two-note Jaws dur dum on ‘Descent’ being met by over-the-hill thunder rumbles is particularly affecting, a poignant night-lost dislocation.

2 thoughts on “Dead Neanderthals – Craters, Molar Wrench (with Sly and The Family Drone), and The Depths (various labels)”