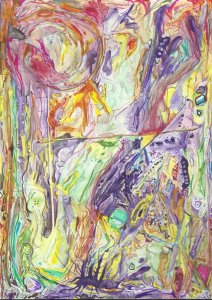 EUH! are an anything-goes free-jazz cosmic car-boot-sale noise band, consisting of Wayne Rex (drums) and Hacker Farm alumni, KEK-W (electronics).  The album is a bracing shot of washed-out spookiness combined with a hectically eclectic approach to instant-composition. A fluid, muddy music. Chaotic improvisations that border on the surreal. ‘Whipporwill’ is metallic clatter in conversation with the blare of a distant air-raid siren. ‘What’s a Dog?’ combines rusting pipes, rubber squeaks and a drunken drum tirade. The drone-breath of ‘Omniharmonics’ swirls around in air thick with concrete dust and looping ghostphonic shivers; free-jazz for derelict south-coast gun emplacements. ’Senior Diners Club 2’, recorded live at one of the artist’s houses (a phone can be heard ringing at one point), is a highlight; full of bloops and echoing klangs ringing over a soft tumble of drums. ‘Lucy’s Dust’ most traditionally uses the duo format: slippery but driving beats are nailed down by Wayne as KEK blurts and squeezes sci-fi dissonance from his machines. ‘Alopecia’ is another effective collaboration: several thumb pianos plucked relentlessly with the drums falling into, if not coherence, at least an oblique sympathy with conventional rhythm.

‘EUH 1’ is domestic kosmiche; ‘Interstellar Space’ reimagined in a damp attic, John Coltrane’s exploratory saxophone replaced with synths made from box-rummaged old kettles. If Rashied Ali had joined the BBC Radiophonc Orchestra, this excellent album may have been the result. 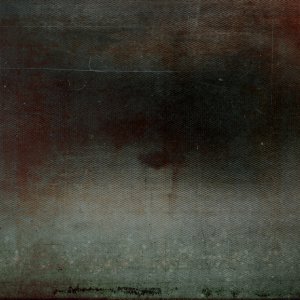 The cold tundral winds blowing through this album will be familiar to long-term April Larson listeners. ‘Up Below’, is inspired by the subterranean but not claustrophobic; April’s music has always evoked (for me) an openness and vastness. Drones, sighs, subverted angelic choirs, ringing glass chimes, all buried in cold cavernous echo, with rumbles revealing obscured rips and undertows. ‘Up Below’ has little of the grit and crinkling surface disturbances that coarsen some of April’s work. The cave systems conjured here are majestic and mysterious; slowly, and smoothly explored. This release focuses on the scooping-out of cenote’s of sound. Brain scans of potholers translated into drone. April Larson makes ambient electronica that sounds like a glimpse of deep-time: human-attention length snap-shots of processes long enough to be alienating. Near-infinite music, tuned into for a short bearable while.

‘Spit Wine’ by Lofe, by contrast is all now and fidget. Tech-dub machine judder and pinched post-punk warble-vocals, by Zolan Quobble: lists and free association intoned over faulty neon video-game loading-screen chunder, mangled guitar scrabble and fuzz-bass riffs. Cranky grot-rock from SE London. Slightly nauseous beats nudging it all into a mental-space where you’re looking out through a steamed-up and rain-streaked upstairs night bus window at the top of a bus stop inexplicably hosting an abandoned Hellraiser 2 video case, a single trainer, and a mulched empty packet of cigarettes. ‘Spit Wine’ is like The Fall circa The Unutterable but more consistently pummelling; The Chap with less sarcasm.