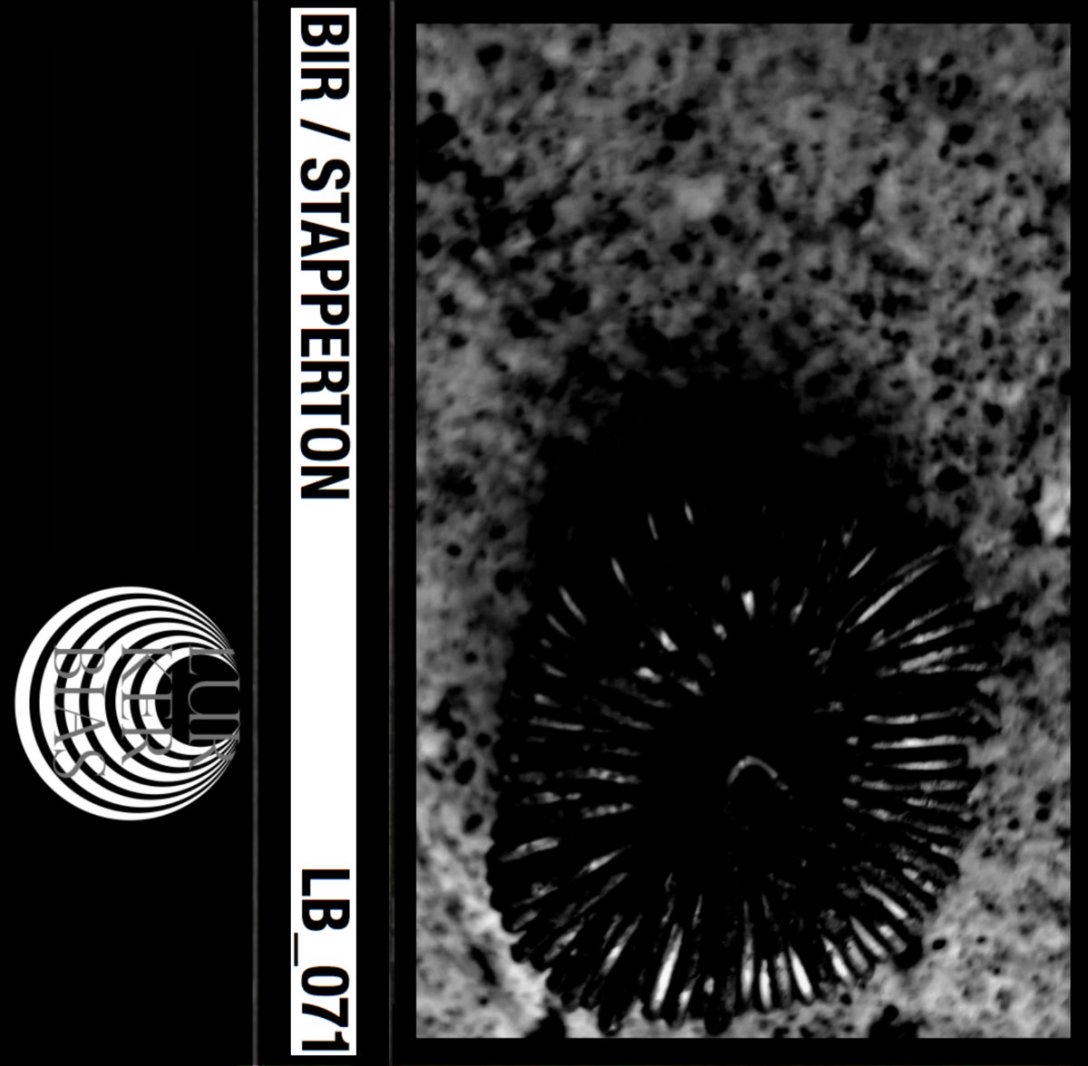 The yawning hell mouth on the tape cover gives you a rough idea of what to expect with this one. Split between Bir (aka Larry Crywater / Maurice’s Death Hotel) and Stapperton, the two artists share your mind in the way some sort of toothed space worm might portion out your unfortunate and slowly imploding cosmic freight lorry, peristalsis-like down their collective void gullet.

Opening with the Bir side, first track, ‘Good Natured Anxiety’, sets the tone with loping metal bin lid beat-mangling and machine error. Like Autechre in the way it drifts and digresses, wandering into near silence at times. Aggressive and harsh but also nuanced and fascinatingly textured, a section drifts into what café/bar background clatter might sound like in a fire, if everyone just carried on regardless. Elsewhere: creaks, engine thrums, birdsong and echoed under-bridge ghost voices. Field recordings of dogs enduring/enjoying fierce wall-noise.

Bir’s other offerings are no less absorbing. ‘I’m Going to Thr-thr-throw All Your Clothes in the Ri-ri-river’ is noise electronics at homebrew-proof strength, but playful with it – it will dunk your head in a clutching wet throat (perhaps the Salaac-maw on the cover) from where you will hear the thing’s terrifying stomach movements, but will pull you out for periods of relative calm to play you vastly slowed down audio of sinking submarines grinding down the sides of oceanic trenches. With birdsong interludes. Distressing, in an inviting ‘I’d like to be disturbed by this again’ sort-of-way. ‘Joan Collins Factory’ is steam-driven rivet-straining techno with traffic-jam aggro bubbling up between the stretched beats. Like that scene at the beginning of at La La Land, but in the dark and mixed up with one of Werner Herzog’s rainforest nightmares, rather than a lurid Hollywood daydream. The side plays out with the rushing sound-knot of ‘Mondegreen’, seething with serrated fury, coming undone in its final seconds, exhausted and drifting into silence.

Stapperton’s side is equally good. ‘Extracted’ features what appears to be an oscillating and enormously amplified deep-didgeridoo. Granular mist blows across the sound field, like cannon smoke in a churned up field. A forlorn announcement calls into rocky empty wilds. A cliff-top lighthouse blares revolving bass-wobble over unmapped puffin-packed ledges. ‘Dear 600’ has more wind-swept ambience; shouts or snarls snatched away on flurries of wind; an atmosphere of entirely absorbing spookiness. ‘Semi Elliptical Portal’ is built around an emerging swell, ascending from the deep, perhaps one of Bir’s sinking subs being dragged to the surface. Enveloping fuzz and rumble from an urban jumble-sale. Tidal furnace-hum overlaid with hissing water-through-pebbles, echo effects and manipulation rendering it thin and burnished-sounding, none of the calmifying quality of a shoreline. ‘Shortwave Analgesia’ plays the album out with a gale whistling through hastily patched windows. Elemental and bleak. Barks and screams occasionally heard over a monochromatic roar.

Would love to hear this in a dingy pub basement. Get ‘LB-071’ here. Check out the rest of the Chicago label’s stuff here.