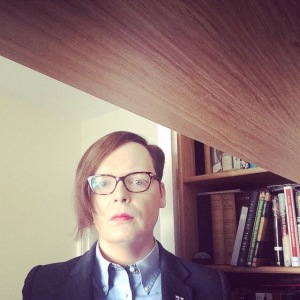 In a previous incarnation of Ears For Eyes, a feature was launched that asked artists to list records and items that they would take with them into a fallout shelter. Resemblances between this and a certain BBC Radio 4 programme are purely coincidental. Relaunching Fallout Shelter Disks, Elizabeth Veldon has selected six musical works, one book, and one luxury item to descend into the earth with.

Elizabeth’s main works are in the fields of piano minimalism, long-form drone and spoken word. ‘Laika & Other Works‘, a compilation of Elizabeth’s music, has recently been released on Third Kind Records.

Here are her selections

I’ve cheated slightly with this as it’s a three cd set. I think this is fitting for a fallout shelter as it concerns death and Eliane Radigue’s study of Buddhist teachings. Besides, I’d have the time to listen to it in one piece. Eliane Radigue is, to some extent, a guiding light for me, someone I keep in mind when I make music so that I remember to take my time and allow the sounds time to grow and evolve.

When the cities are destroyed this ghostly evocation of them (made from mapping electronic fields while walking through five European cities) seems somehow fitting.

In a more general sense, the ghostly nature of these recordings always make me think of a glitching Google Earth showing the wireframes the images are built on, almost as if you are looking on as Kubisch lifts the corner of reality and lets you see a deeper reality.

Between Christia Ludwig’s sensitive and moving readings of the Kindertotenlieder (songs on the death of children) and the symphony Mahler wrote as he thought he was dieting, these meditations on mortality seem all to fitting for this selection. With the 9th, Mahler offers only one way to escape suffering and that is through the release of death. The story, however, has a happy ending of sorts as he survived and worked on a tenth symphony (which is no less moving) which was left unfinished at his death.

This cd is something of an overview of english song from the period John Dowland operated in and has made it onto my list for this reason (rather than a cd of Dowland’s music.) This contains music by Dowland himself, Ford, Campion, Johnson, Danyel and Hunnis and… well, it makes you heart swell with the beauty and playful elegance of the tradition it represents.

This was the first of this classic series I ever heard and, ironically, the only one unpublished at the time. The first side of this alone makes it worthy of inclusion, moving as it does between upbeat dance tunes, charming folk songs and murder ballads. I don’t think I have to defend this any more.

An unusual choice for a non-believer, but my reason has more to do with its language and the primary place it holds in the formation of not only English literature but the English language itself. Rather than taking multiple books of poetry into the shelter, this book would help me remember the millions of poems which borrowed its language and the conversations which were peppered with phrases taken from it, and in the unlikely event of me getting out of the shelter and helping to rebuild society, this book – shorn of its religious nonsense and the need to obey its every contradictory word – would help immensely in that process, as it helped form the culture which preceded the blast.

I was tempted to ask for a piano here to make music but music can be made with whatever you have to hand so I’d want make up. There is no reason to allow one’s standards to slip, even if one is facing the inevitability of death.

Ears For Eyes: You mention music can be made with anything, what sort of shelter-objects would you employ? What would your music be like?

Elizabeth Veldon: Literally any object can be used to make music – the bunk’s metal frame, the mattress, cans of food. When I began making music I used a computer, a broken tape recorder without a speaker, and a mono-to-mono lead. The resulting cd was purchased by the National Library of Scotland.

Music can be made with anything.

I assume the music would be rhythmic, given what was available to make it with.

EFE: You choose the Bible for its place as a source of language and literature. Does an apocalypse strike you as an end of things? J.G.Ballard regarded his early trilogy of end-of-the-world novels as liberating, his characters embracing their transformed environment.

EV: No end is ever final. The destruction above ground will abate, something new arise. Even when our planet is consumed by the sun it’s only the beginning of the process which will result in the sun going super nova and spewing it’s contents into the cosmos to be used in the construction of a new solar system.

I see a destruction as the possibility for renewal, as you put it, it’s a chance to start over and make a better world ‘fail again, fail better‘ as Beckett put it.

EFE: Your selections seem defiant of the circumstances in which they’d be listened to. The Bach (and makeup) in particular, a grand denial of the destruction above the ground. Can music help you escape? Would it fail in the most extreme of situations?

EV: Music always allows us to escape, allows us to experience something outside ourselves and our own lives and as to failing? Well even if i die my body will, eventually, feed plants when they come back.

There’s a passage in one of Cage’s writings where he is trying to find meaning in the Buddha killing himself by eating a poison mushroom. He realises that this can be seen as a symbol of fungi breaking down dead organic matter and that this leads to the fertilisation of plants for the next season of growth – that this is not death but a cycle of death and rebirth.