This second edition of The Electric Dog Show, run by Soft Bodies Records, was held in the basement of Dalston’s Power Lunches bar was a synesthetic delight, combing a varied band line-up with colourful projected film accompaniment, the artists performing in a hazy fog of strange film fragments.
Quimper made electro odd-pop with fidgety rhythms.  Nocturnal and weirdly suburban; the sound of things that should be foxes but aren’t, dashing across orange-washed pavements.  The singing was smeared and echoed over laptop-derived electronic backing, sounding a bit like Broadcast covering a Junior Boys song they’d only heard once through a neighbour’s wall.  A set of dreamily-aloof ballads, soaked in ennui and spooked by owls.  Music for hot nights where whatever is ruffling through the bins below your bedroom window sounds like it has too many legs.


Gyratory System are a reeds, pedals and bass trio that made looped and phased jazz riffs, closely curling, insistent and forceful.  Dub rhythms underpinned phased sax interactions.  A band lively and bouncing, the film projections on white office shirts were an apt metaphor for the label itself, the extraordinary and every day in ghostly uncanny concurrence.

Howlround were amazing, perfectly eerie, a droning, revolving yawn of sound, a morass of crumbling noise, whale moans, the distress of slowly compressing hulls and skulls, they; conjured a hard to place melancholy – perhaps from the knowledge that the tapes and machines are at the end of their lives, still vibrant but with numbered days.  Long strands of tape spun around stands, the duo stumbled around the flickering web like spiders, the audiences’ minds caught and bound, constricted further with each passing minute.  A ballet of thread-hanging twirls, or a pair of tape-architects measuring drone boundaries for fencing-in sound-ghosts.  This was likely to be the last live performance for the duo, as Howlround are faced with a choice between playing live and preserving the machines for further spectral recording duties. 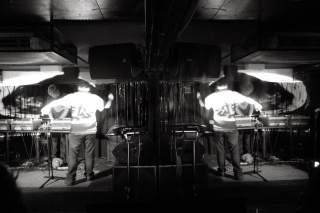 The projections were brilliantly selected throughout: Disney cartoons, Svankmajer Jabberwocky loops, Terry Gilliam collages; a perfect overlay for the bands on stage, a shifting of place, the basement descending into dreams.
An evening canvas of wonderful weirdness, painted with strange light and stranger sounds.  The Electric Dog Show will become an essential fixture among London’s avant club nights should it become a regular occurrence. 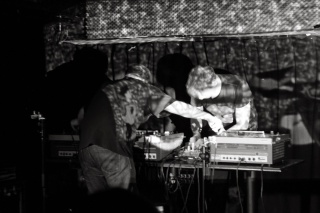