This live event, taking place in the lovely environs of The Horse Hospital, near London’s Russell Square, was a double bill of music not so much inhabiting the uncanny valley as dynamiting deeper trenches within it. 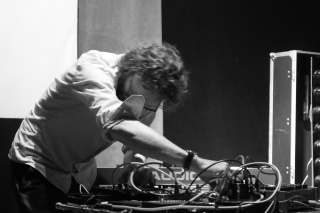 First act, Paul Snowdon’s Time Attendant alias, stirred a cauldron of liquid beat driven electronic bloop ‘n’ hiss.  His set mapped a circuitous archipelago populated with a skewed and melted rhythmic logic.  Hunched over a table packed with wires, pedals, dials, and switches; Time Attendant whipped up trills of upper register wobble, bedded within clicks and shredded 8-bit beeps, deft sighs, shuddering fuzz, swipes of wah, bass drones, and garbled voices from the beyond.  It never felt too process-driven, the sound twisted and unfolded in an intuitive and seemingly improvised manner, full of possibility and wide open imaginative spaces.  Never a machine-dominant set, a sense of real struggle and human ingenuity was always evident, split and routed through wires and alien translation.  A perfomance that was alternately sweet and caustic, haunted and corporeal, structured and chaotic; Time Attendant was a stylophonic maestro, a wizard of wires.

Next, Sarah Angliss took to the stage, flanked by Wolfgang and Hugo, a pair of deeply eerie automatons.  The heat of the evening added a fever-dream element to the surreal proceedings, Angliss fearing that we were “almost at the melting point of plastic”, which seemed to correspond with the melting point of my brain.  Her set was a miniature chamber-orchestra of bells, smeared voices, bowed saw, keyboard, and whirring ventriloquist head.  Fundamentally strange but enticingly so, like an inviting haunted house, Angliss presided over a series of sound pieces and subtle torch songs that included some wonderful moments.  Among them were: Wolfgang thumping drum pads, his “little heartbeat dispossed” over a mossy pot of rotting loops, decayed melody and human panting; a flexing, breathing handbag at the side of the stage, expanding and contracting in troubling unision with the music; a duet with sister, Jenny, her partner in Spacedog, for a song about the Lankin, a baby snatching mythical intruder: the sound of a squelching infant gargle, effortlessly disturbing and throught provoking.  My favourite part of the evening was a nautical love song with beautiful lyrics, addressed to a submariner , “I’ll lick the minerals from your skin, if you’ll lay upon this bed of mine”; the music encompassed washes of tide, sonar pings, and aquatic distortion; a magical, captivating electro-ballad. 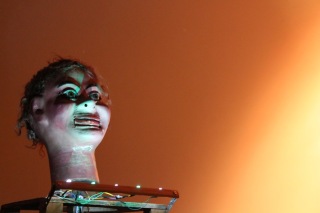 Aether Music was entirely successful; it would be difficult to find an evening of more beguiling, fascinating music.  An evening that conjured folklore and monsters from machines and robots, with a full beating heart nestled within a barbed nest of wires, humming with electricity. 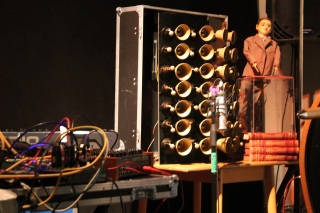