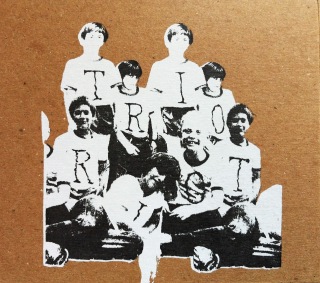 This self-titled debut from Trio Riot on Efpi Records is instantly engaging, launching into a halting, fumbling, rattling skronker. Its tight flurries of motion collapse into kit-troubling drum-explorations, moving into a punkish squall from the halfway point; the beats a hardcore oompah assault for the saxophones to writhe and boil over; the tone brazen and harsh, often piercing. This great introduction to the trio of Sam Andreae (tenor sax), Mette Rasmussen (alto sax), and David Meier (drums) isn’t squandered; ‘Lala-lala’ has a sweeter more placid nature, a melodious duo-exchange. The album never wilts from there.

Trio Riot are a band making music of great fun and exuberance, combined with a command of complex structure and capable of sheer joyful noise-making for its own sake. Their songs collapse and expand often without warning, their paths only seeming in any way linear after several listens. Often comprising small discrete tune-fragments bracketed with silence, these boxes spill over as the songs progress, material spilling and comingling, walls collapsing into twisting solos, clicking percussive seizures and heated buzzing, before the main thrust of melody regains a semblance of control. A mad proliferation of ideas are delivered at a furious pace, no track stretches much beyond five minutes; a punkish sensibility keeps the album racing towards the end. All of the songs demand repeated visits; they expand into subtle improvised sections, screaming fire-solos, tight riffing; this is a band as comfortable in a rock setting as they are on the outer limits of avant-honking. This method comes together in a brilliant cover of ‘Disorder’ by Joy Division; that band’s frantic immediacy, fluidity of movement, and intelligence, making them the perfect muse for Trio Riot.

It is great to hear a band so deftly combine tunefulness, passionately fierce noise, and exploratory moments of tranquillity and near-silence: tiny pops, quacks, and rattles sometimes the only sign that the microphone is still on. Their frequently tumultuous racket is valiantly marshalled by Meier into a speeding juggernaut before the wheels inevitably fall off and the whole thing smashes itself to pieces. What distinguishes Trio Riot is that it’s just as enjoyable picking through the smoking rubble as it is witnessing their skill at keeping it on the road in the first place.