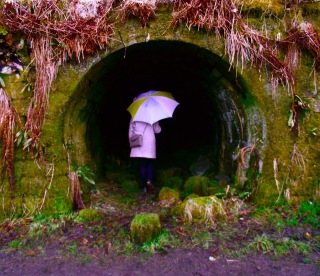 Sophie Cooper has two albums out at the moment: a solo tape ‘Labyrinth’ on Exotic Pylon, and a split with Ignatz, reviews of both to follow in the new year.  She has been a member of The Stoke on Trent Wind Orchestra, Cooper Jones, Leopard Leg, Tom Cool, Wing Horses, Remedial Queen of England and The A Band.  Here are her thoughts on 2013.
—————————————————————-
Top ten gigs of 2013
A truly unforgettable experience, I loved this blimming gig. It was like watching Shirley Bassey fronting Black Sabbath doing Incredible String Band covers aka AMAZING.
2 creepy boys from Yorkshire decided to hand out tin cans for the audience to bash on and then led us out into the streets of Leeds down to the pictures to watch a dirty film. Pretty good.
This was easily my favourite performance at Colour out of Space this year. I’m really into both comedy and art in music which the brothers Usurper (and fostered sister Dora Doll) married all together very well.
Chris Hladowski, one of my top ten Yorkshire pals, took his excellent Family Elan project and mixed it with some of the best Pakistani and Pakistani-British musicians living in the north to produce an awesome evening of traditional and not so traditional folk music.
Darren (aka Pig/Filthy Turd etc) gets a second nod in this list. Him and Andy Jarvis wore evil looking animal masks and plodded round the church in Tod. I was freaking out thinking this would be the first and last Tor Bookings show until the super cool caretaker asked if VP would be up for a residency because she loved it that much!
I’m a big Spiritualised fan so getting to see the legend that is J.Spaceman play Café Oto was fantastic. I was rocking out in a big way.
Totally intriguing performance from Jason and Fearny down in London’s sticky floored Buffalo Bar. I was hanging on every word, cracking a ton of smiles and all the while keeping one eye on Fearny to make sure he didn’t make any sudden movements.
Hmm, seems like Recon Fest is a bit of theme in this top ten! An excellent festival all round and my first time watching the incredible N.Racker. A terrifying soundtrack made on loads of Sam’s homemade thingymabobs.
Oi! Oi! My southern pals came up to play a show at the PWHMOBS’s HQ. A great time was had before at Manchester Marble (Earl Grey IPA etc) and the music was pretty damn great as well. They are lovely lads our Eddie and Ian.
Ha! My own show. I had to include it because this was my return to playing live music after a few years off and I loved every second of it, surrounded by my mates in my favourite city.
—————————————————————-
Sophie’s Soundcloud, Twitter, and Blog.