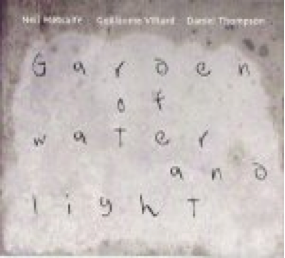 ﻿
Recorded in December 2011 at St Leonards Shoreditch church; this an album of close musical communion, each gesture between the players answered.  In particular, Viltard (bass) and Metcalfe (flute) are effective in mimicking each other in high register congealing pools of sound.  Thompson (guitar) often foreshadows the more thickly drawn lines of his partners.  The interaction between the players is tight and intuitive; the dense scrabbled clusters and string bounce from Thompson are cut through by the straight darts of Metcalfe’s flute, slicing the thicket of Viltard’s mossy groaning coils.  A beautiful display of ensemble playing, sounds are selected with care and sensitively deployed.  Close listening is required as there is a very subtle piling up of detail, an economy of delivery that leaves plenty of space and stillness.  However, the group is not afraid of the occasional bolder noisier movement; at one point Thompson and Viltard lock into a wobbling, shivering mass.  Thompson at times resembles a vibrating barrel of rusted springs.  The second piece opens with a dense buzz of bass; a shorter, more ominous piece, thick with unresolved tension; Viltard providing a thick pulling undertow for Thompson and Metcalfe to struggle against; they frequently drop out as if pulled beneath, only to emerge again suddenly, as if violently breaking the surface, splashing and gasping.
‘Garden of Water and Light’ is a work of contrasts and fluctuating mass, its peaks built organically and patiently.    The appropriateness of the title becomes evident after the album really hits its stride about 16 minutes in.  Despite its improvised nature, everything feels balanced and ordered, each element growing and twisting around its neighbour.